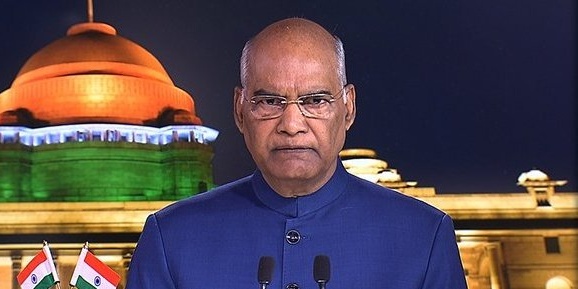 NEW DELHI: Discipline is necessary to run the country successfully, and this must be why former Uttar Pradesh chief minister Dr Sampurnanand set up the Sainik School in Lucknow, President Ram Nath Kovind said here on Friday.

The only thing on Dr Sampurnanand's mind must have been that unless there are disciplined citizens, there is no way to take the country forward on the path of development, the President said at an event to mark the Captain Manoj Kumar Pandey Sainik School's Diamond Jubilee Year. Kovind unveiled a 20-foot-high statue of the former UP chief minister at the school in Lucknow's Sarojininagar.

Accompanied by First Lady Savita Kovind, he also inaugurated an auditorium named after Dr Sampurnanand at the school, laid the foundation stone for a girls' hostel and released a postage stamp during the programme. In his address, Kovind lauded the state's governor, Anandiben Patel, Chief Minister Yogi Adityanath and the education department.

He said this is the "first sainik school" in the country which also secured the first position in the field of military education for women. Military education is a big step towards women empowerment, Kovid added. Kovind said he will visit Kargil on Dussehra to pay homage to martyrs.

He also expressed his gratitude to the families of Dr Sampurnanand and Captain Manoj Kumar Pandey. Captain Pandey, a Param Vir Chakra awardee, is a Kargil war martyr and student of the same school. Born on January 1, 1891 in Varanasi, Dr Sampurnanand held the office of the Uttar Pradesh chief minister twice. He was also appointed the governor of Rajasthan later.