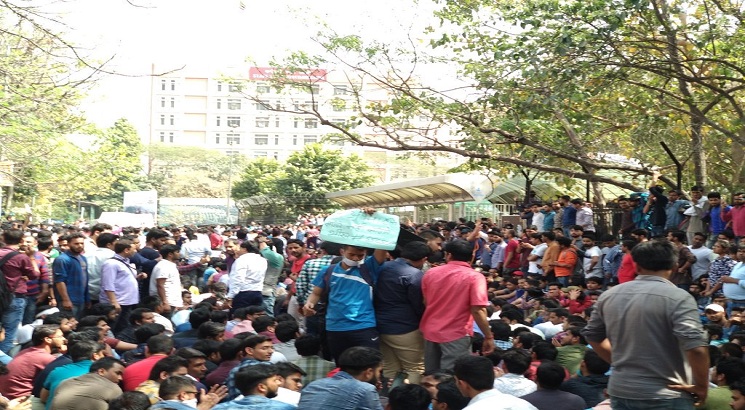 NEW DELHI, MARCH 3: The protest against alleged scam of paper leak in the Staff Selection Committee (SSC) Combined Graduate-Level (CGL) Tier II examination has spread to other parts of the country with students joining their counterparts in Delhi, demanding CBI inquiry.
On the other hand, the Chairman, SSC released a statement after meeting Minister of State, Ministry of Personnel, Pension and  Public Grievances saying, “The evidence being provided by the candidates be taken on record and if found substantiated,  the matter will be referred to CBI for further inquiry. Else,  the  Crime  Branch  of  Delhi  Police which is already seized  of  the  matter upon a referral  by  Staff  Selection Commission, shall complete its inquiry in a time-bound manner and submit its report for further necessary action.”
The alleged Scam
The examination of SSC Tier II was held between February 17 to 21, in which nearly two lakh from all over the country participated. The Tier I exam was held in August 2017 and Tier II exam to be held on 27th November, but it was postponed by the Commission.
Candidates have alleged a huge scam in the SSC exam and demanding that scam should be investigated by the CBI and all the examinations between February 17 and February 20 should be held again in afresh manner. They have also demanded that the examination process is reviewed thoroughly.
The students began their protest SSC office at CGO complex in Delhi on February 27, demanding a CBI investigation into the alleged paper leak in CGL exam held between February 17 to 21.
Political parties have also lent their support to the protesting students. Delhi Chief Minister Arvind Kejriwal tweeted, "Thousands of aspirants are demanding a CBI inquiry into the SSC exam scam. This issue is related to their future. The central government should immediately accept the aspirants' demand and order a CBI inquiry."