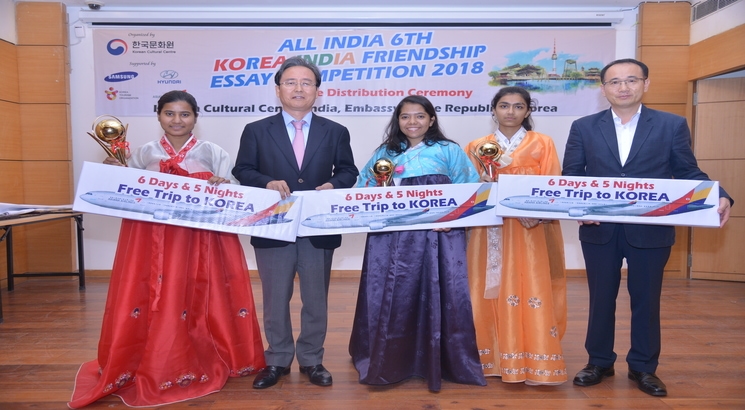 NEW DELHI, OCTOBER 12: Thousands of students across India participated in the sixth edition of Korea-India Friendship essay competition organized by the Korean Cultural Centre in India.

The essay competition is aimed at spreading knowledge and interest about South Korea among Indian youth, and expose students towards the culture, history and tourist attractions of Republic of Korea. Over the years, there has been a constant rise in the number of students participating in this competition.

Ambassador Shin Bongkil while addressing the gathering said that it was amazing to see such huge participation in the competition. The topic of the contest was not only interesting but difficult as well. India is a big country when compared to Korea, but both the nations have a lot similarities and wide scope to learn from each other. Kim Kum-pyoung, Director, Korean Cultural Centre India said, “Students have put immense efforts and gave tough competition. The increasing number in participation and depth of research on the subject was clearly visible in their essays.”

The competition was divided into senior and junior group. The topic for junior group was “Why South Korea is my Favorite Country?” in which 19,316 students from class 7 to 9 participated. Senior Group consisted of classes 10 to 12 students and its topic was “Why I want to become an Indian Ambassador to South Korea?” in which 8,887 Students participated. The first position in senior group was grabbed by Aakritie Raj (DAV public school, Faridabad, Haryana), the 2nd position was bagged by Sukhmani Kaur Riar (Army Public School, Ahmadabad Cant, Gujarat) and Yanshi Vaish (Puranchandra Vidyaniketan, Kanpur, Uttar Pradesh) and 3rd position went to Muskaan Kapur (DAV Public School, Faridabad, Haryana) and Pratishtha Gupta (DAV Public School, Faridabad, Haryana).