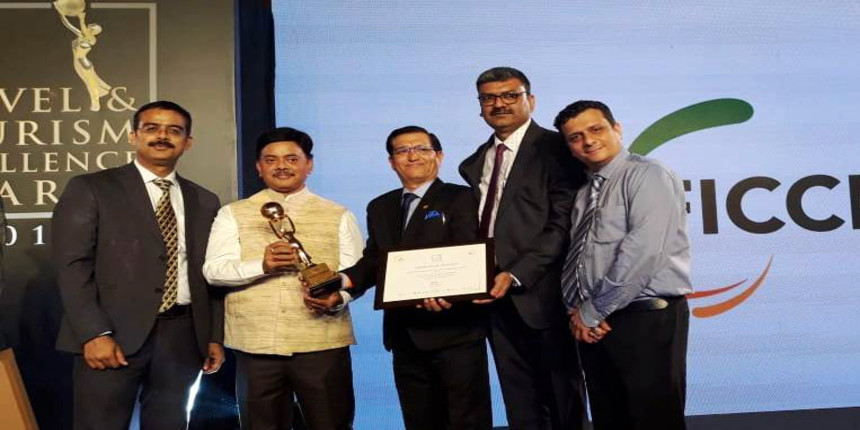 NEW DELHI, AUGUST 26: Amity Institute of Travel and Tourism, Amity University Uttar Pradesh was conferred upon the Federation of Indian Chambers of Commerce and Industry (FICCI) Tourism and Travel Excellence Awards, 2019 under the category “Award Based on Skills –Including Best Travel and Tourism Institute” during a function held in Delhi.

The award was received under the by Prof. (Dr.) M. Sajnani, Dean Faculty of Hospitality & Tourism, Amity University Uttar Pradesh, Noida. The category on skills saw more than 18 entries from leading Government and Private Institutions from across the Country. The awards were instituted by FICCI in Technical association with EY (Ernst & Young LLP).

The awards were conceptualized to recognize states, organizations and individuals for their exceptional contribution to tourism in India while encouraging innovation and entrepreneurship in the space. The aim of the awards is to give a boost to inbound and domestic tourism across various platforms, undertaking special initiatives as well as addressing key industry issues while acting as a catalyst for policy change.

In the introductory address the chair of the jury, Sh. Vinod Zutshi (IAS), Ex. Secretary, Ministry of Tourism, Government of India and Mr. Piyush Jain, Director EY introduced the transparent process adopted for the shortlisting, validation and selection of the awardees done by the jury.

The award function was attended by more than 300 leading organizations and institutions from Tourism and Hospitality sector from all across the country.