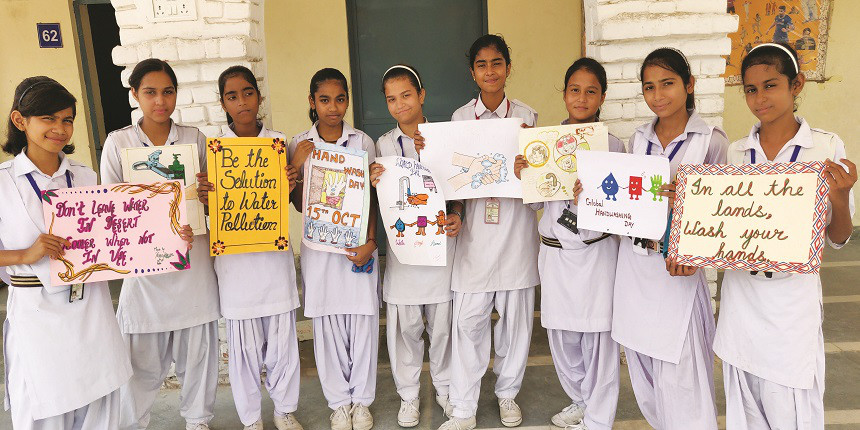 With the best teachers and facilities, students of the 22 Rajkiya Pratibha Vikas Vidyalayas have been winning awards in international competitions…

Most states run some schools they are proud to showcase – they get the best teachers, are well-funded and some even select their students. Delhi has the Rajkiya Pratibha Vikas Vidyalayas, or RPVVs. While many of the state’s schools struggle to keep attendance up, the RPVVs routinely post stellar results in the CBSE’s Class 10 and 12 exams.

“I joined RPVV Civil Lines in Class 9 and within a few months I started experiencing a change in me as the teaching style, my classmates and the school environment were all very different from my previous school,” says Ashish Angel, a Class 12 student. He was selected to represent India in the Physics Olympiad held in Moscow this year.

Like Angel, Harshita Roy and Satyam, both twelfth graders at RPVV Sector 10, Dwarka, participated in 4th International Olympiad of Metropolises in Moscow in September. In a first for Delhi’s government schools, they won a bronze medal in chemistry. But this is not the first generation to succeed. As Bhagwati Swarup Aggarwal, principal RPVV Surajmal Vihar, pointed out, the school’s alumnus, Abhinav Rohila was in the core team for Chandrayaan-2, India’s second lunar mission.

The origin
Every year a large number of students from the RPVVs are selected for admission by top engineering and medical colleges. Many of its alumni have gone on to join the administrative services, defence services and occupy positions of responsibility in India and abroad.

Aggarwal adds: “Many of my students are from poor, marginalized families but there is no dearth of talent or determination. This year, seven of my students secured admission in medical colleges and two students in Indian Institute of Technology, Delhi.”

The first three RPVVs were set up in 1997 and from the beginning, they focussed on the holistic development of children. The school administration places equal emphasis on academics, sports and other extra-curricular activities. The schools have chapters of the National Cadet Corps and the National Service Scheme, eco-clubs and a host of other teams and groups. “Co-curricular activities are always given preference,” says Urvashi Gupta, head of school, RPVV, Civil Lines. “Many of our students win prizes at the state level. We even use laptops, projectors and K-Yan (a multimedia device for learning) so that students are comfortable with technology when they leave school.”

The RPVVs exclusively cater to children from poor families and only children enrolled in government schools are eligible to apply. Admission to Class 6 is through an entrance test. Encouraged by their success, the Delhi Government has expanded their network and the total count now stands at 22.

Autonomy for teachers
Consistently outperforming most private schools in the city, the RPVVs’ teachers have the autonomy to plan and execute their lessons as well as other enriching activities for students on their own. Teachers are also provided support to attend professional development programmes and work as resource persons at programmes organized by state and central teacher training institutions. This affords them both exposure and experience.

Teachers are appointed with care. Any vacancies are filled swiftly. Those already teaching in government schools are eligible to apply and are appointed after an interaction with the school administration.
“Before I came here, I didn’t know I could work so hard and get such high marks,” said Farman Ali, son of a contractual worker at a private factory and a student of RPVV Civil Lines. “In the school I attended earlier, I was a mediocre student. The teachers here gave me individual attention and my continuous interaction with our HOS madam inspired me to set higher goals for myself.” Ali joined the Civil Lines school in 2014.

Quality for the marginalised
The RPVVs were set up with the objective of providing quality education to underprivileged children by raising the standards of education in government schools. The idea was to create a system in which students will get an opportunity to not only pursue academic excellence but also excel in sports and other activities.

“We are now in a position to compete with elite schools but we cater to students who are not from the elite class of society,” says Vipin Kumar, head of school, RPVV Sector XI, Rohini. Ashish Angel’s father, for instance, is a contractual labourer and Satyam’s delivers cans of purified water. Harshita Roy’s the exception: her father is a primary school teacher.

The schools have adopted some unique techniques of teaching like group teaching in which classes are divided into mixed groups of students with different abilities to facilitate peer- learning. Mostly they are taught through activity-based learning in which each child gets to participate.
Another new feature is the system of “connected classrooms”, being tested first at RPVV Civil Lines. Teacher and pupils connect through laptops. Students, many of whom don’t have laptops at home, learn to handle technology and interact through it.

“The recent and most encouraging achievement for us has been when we went with a delegation of eight students and two teachers of RPVV system to participate in 4th International Olympiad of Metropolises held at Moscow. We won two bronze medals in chemistry and our school was one of the 20 top teams that participated in the Olympiad of Metropolises,” said Vipin Kumar. Students from 45 megacities from all over the world had participated in the contest first held in 2016.

Dr. RP Singh, who heads RPVV Sector 10 Dwarka, has visited Cambridge University and Indian Institute of Management, Lucknow, for training. “I believe in the philosophy of learning by doing”, says Singh. Students are taught in such a way that they learn as they do. Recently, his students gained the hands-on training in designing soft robots at a workshop organised by Harvard Biodesign Lab at Harvard University, United States. “Our students had an opportunity to meet Nobel laureate Peter Agrey as a part of an Inspire camp. Many students have received Inspire scholarship to convert their innovative ideas into reality,” said Dr Singh. Inspire is a Government of India programme intended to foster scientific talent.