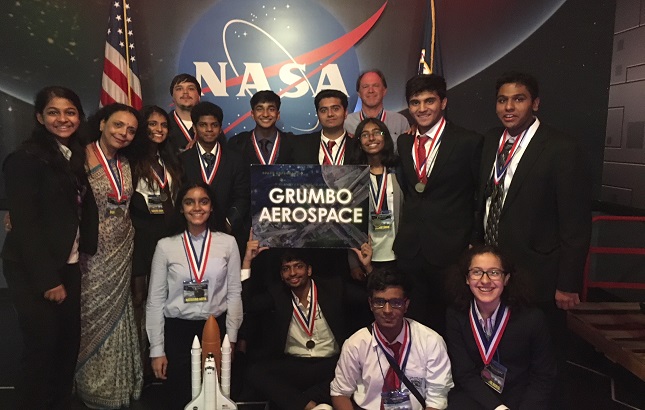 NEW DELHI, AUGUST 9: It was a pride and celebratory moment at DPS R K Puram when the team of 12 students alongwith their advisor, Ms Rupa Das came to the school after winning the prestigious “International Space Design Competition in NASA as part of the winning “Grumbo Aerospace” team. Sharing their success and the experience with the media, the students enthusiasm and confidence knew no bound. This is for the first time the school won this renowned competition, where 30 reputed schools with brilliant students from around the world participated.

Before leaving for USA, the team visited the Honorable Vice President of India and the Chief Minister of Delhi to seek their blessings.

The students were given 43 hours to prepare a presentation on the theme, “Settlement on Moon in the year 2043”. It involved various aspects of planning a settlement on the lunar surface, from developing structures to requirements like power & water, cost of development, etc. It was a comprehensive Corporate Proposal to be submitted.

The team was paired up with high school students from the USA, UK, Australia, Argentina and Uruguay to constituting to the company “Grumbo Aerospace”, with NASA engineers acting as the ‘CEO’s and ‘Advisors’ of their company. After a gruelling 43-hour final, working on a moon surface city meant for research into terraforming, the company emerged as International Winners.

“It required Not only great intellect but also other important skills like team work, practicality, sincerity, hardwork and a will to succeed. This award, thus, means a lot for the school”, said Ms. Vanita Sehgal, Principal, DPS R K Puram. Quoting Paul Brandt “Don't tell me the sky's the limit when there are footprints on the moon”, she further added candidly.

During the competition, students also got a chance to attend technical sessions organized by reputed NASA & Boeing engineers involved in known Space missions —the Space Shuttle and Apollo programs— such as Norman Chaffee and Anita Gale.