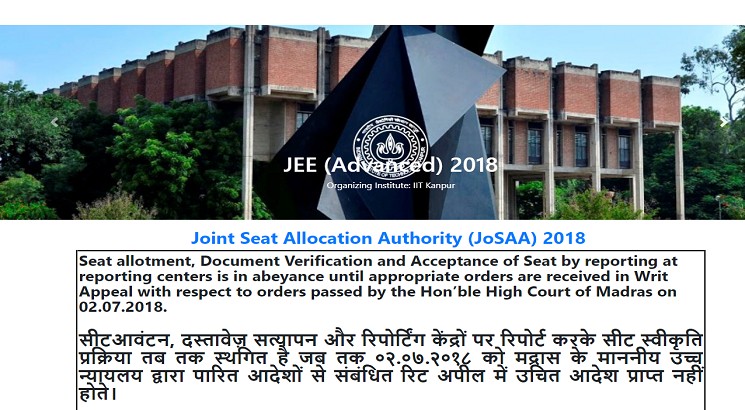 NEW DELHI, JULY 6: In a notification released on its website on July 6, JoSAA has announced it is suspending all future seat allotment, document verification and acceptance of seats at reporting centres until further orders from the Madras High Court. The decision follows the court’s directive on July 2 wherein it asked IIT Kanpur, which conducted JEE Advanced 2018, to stick to its original instructions when evaluating papers.

It may recalled that in the exam guidelines, it was clearly mentioned candidates need to round off to the second decimal place. It also also mentioned full marks would be allotted only if candidates followed these instructions.

However soon after the exam, IIT Kanpur announced that they will award full marks to candidates even if they didn’t round off to the second decimal place. It meant “if the answer to a question is the integer 12, then the following answers 12.0, or 12.00 will also be considered correct”

When her mails failed to elicit any response from IIT Kanpur, she finally approached the Madras High Court, which admitted her plea on June 7.

The court while pronouncing its decision said that giving preference to candidates like the petitioner wouldn’t increase the total number of selected candidates, though their rankings may be altered.