One month after the Delhi government allowed Class 9 to 12 students to return to schools with 50 per cent capacity from September 1, students and teachers welcomed the return to a semblance of normalcy. 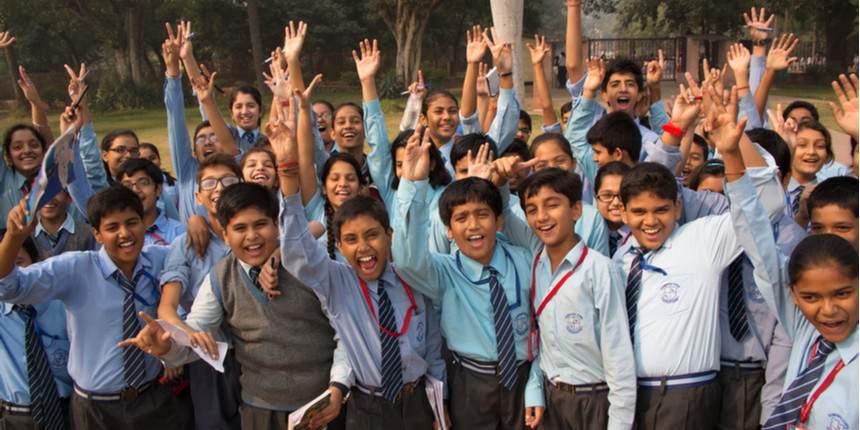 NEW DELHI: Back at school for a month, Class 11 student Mansi is delighted she doesn't have to share a mobile with her two siblings as she did during that seemingly interminable academic year that was, and also upset she can no longer sit within whispering distance of her friends in class.

Across the ‘class’ divide, Avishi Goel is also happy to be back at her private school in Delhi but is still trying to get used to the regimen of wearing masks at all times, not sharing lunch boxes and sitting socially distanced from others.

One month after the Delhi government allowed Class 9 to 12 students to return to schools with 50 per cent capacity from September 1, students and teachers across the spectrum welcomed the return to a semblance of normalcy.

The pandemic has meant different things to different people – those such as Mansi often called upon to sacrifice her online classes as the eldest of three siblings, the more fortunate Avishi who had devices but often found her attention flagging, and the teaching community that balanced Covid fears, home responsibilities and the tough job of connecting with students through a screen.

While the threat of Covid exists, the number of cases across large parts of the country have dipped, prompting educators, parents and students to say that normalcy is called for so the process of effective learning can continue. Many are of the view that the decision to go back to the classroom is the answer to issues of digital divide, quality of education, mental and physical health and the need for social interaction.

“I had to miss a class quite frequently because one or the other of my siblings was attending theirs. It’s a relief that schools have opened. Now I don’t have to worry about getting hold of a phone and frequent network issues,” 16-year-old Mansi, the daughter of a chauffeur, told PTI.

Saniya Saifi, who also studies in Class 11, suffered the consequences of the yawning digital divide too. There was only one phone between her homemaker mother and herself. “It was difficult to sit through a class as somebody or other would call on the phone and my class would disconnect even before I could disconnect the call. Due to network issues it would often be difficult to rejoin the class,” Saniya said.

As the COVID-19 situation eased across the country, several states, including Telangana, Gujarat, Haryana and Rajasthan, started calling students back to school from as early as July. Delhi, however, remains cautious. On Wednesday, the Delhi Disaster Management Authority decided to reopen schools for junior classes only after the festival season, official sources said. It maintained that the Covid situation in the city is "good" but precautions must be maintained, sources present in the meeting chaired by Lt Governor Anil Baijal said.

While students such as Mansi and Saniya with limited resources have been able to bridge the digital divide by returning to the classroom, Avishi, too, is thrilled at being back among her friends. “It’s fun to go back because we’d have network issues or the teachers would not be able to pay attention to everyone. The best thing about going back is the physical interaction with friends and teachers. Also meeting with friends feels good,” the Class 9 student said.

Her father Basant Goel, who owns a chemist shop in the national capital, has his doubts about the new “hybrid mode of education”. However, he is content for now as his daughter is finally getting some physical activity. In the hybrid mode, the Delhi government has allowed parents to decide whether or not they want to send their child to school. Some students therefore attend classes online simultaneously with offline students. “We tried online for a few days, but the school doesn’t have a projector or something to show the blackboard in a better way. Also, the teacher’s attention is divided among online and offline students, so we had to send her to school. If nothing else she is physically active now,” Goel told PTI.

The move to hybrid has not been easy for school administrations and teachers either. According to Sunita Swaraj, principal of The Heritage School, Vasant Kunj, it posed a new set of challenges. “Switching to hybrid seemed easy, but we also have to deal with limitations of bandwidth, network disruptions, attendance upkeep and simultaneous management of the virtual and the physical space,” Swaraj told PTI. The school decided to call students in staggered small crews to “facilitate collaborative learning and to limit the number of students on campus”, she said.

Teach For India Fellow Aniruddha Bhattacharya added that being in a classroom also connects teachers and students in a way that is not possible across screens. "Everyone has at least one teacher in their life who you could tell anything, from breakups to your family issues. They can only share such problems with that one teacher who is a friend too. It becomes very difficult in an online environment,” Bhattacharya, who teaches in a Delhi school, said.

The pandemic hit the teachers equally, if not worse. Maturity and compassion was expected of them at a time they could have been mourning themselves, said Delhi school teacher Satyendra Gautam, adding that said the only option was to adapt to the new reality. “Some of our colleagues came back from the clutches of death, some had deaths in their families. But being an adult you are expected to act mature and make do with the situation as we had to take care of our students too. So we adapted to the new conditions,” Gautam said.

Experts at the Indian Council of Medical Research said recently that schools need to be reopened in a phased manner, starting with primary sections, with proper implementation of multi-layered COVID-19 mitigation measures. In an opinion piece in The Indian Journal of Medical Research, the experts said testing strategies in school settings could serve as key interventions to check the potential spread of the virus. They also cited a UNESCO report that school closures in India for more than 500 days have affected over 320 million children. It has hit children from relatively deprived hamlets and slums with many not being able to read more than a few words.

Also Read | Maharashtra CET 2021: Re-exam for students who couldn’t appear due to heavy rain in state

A survey found that students missed out on social interactions, lacked physical activity and had a sense of loosening of the bonds of friendship due to prolonged school closures, said the opinion piece 'Reopening of schools during COVID-19 pandemic: A persistent dilemma'.