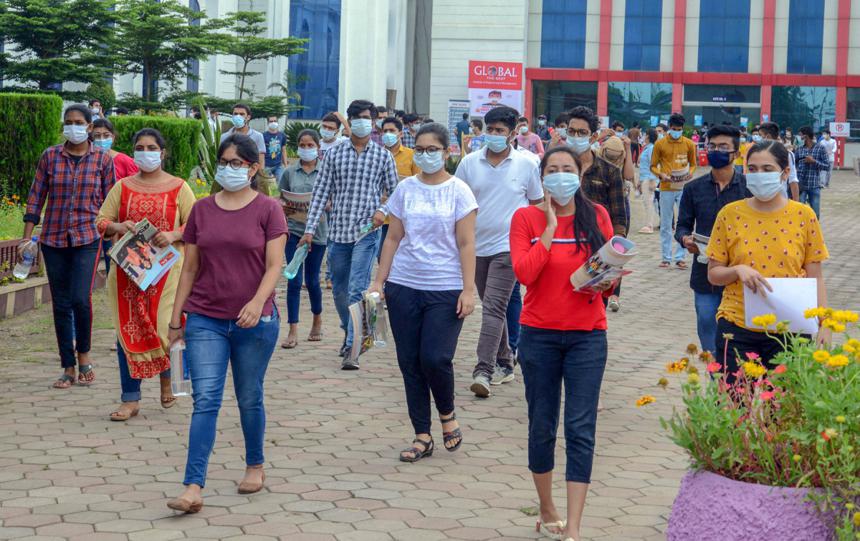 NEW DELHI: Appearing for the JEE (Mains) during the pandemic cost the parents of Ayan Roy Mahapatra Rs 25,000 to cover a distance of 365 km from Malda to Kolkata. Ayan Roy Mahapatra had appeared for the Joint Entrance Exam (JEE)-Mains from a test centre in Salt Lake area here on Tuesday.

When contacted, his father Anup Roy Mahapatra said, "we started on Sunday morning for reaching the city so that we could reach Kolkata before complete lockdown in West Bengal on Monday. An AC SUV was needed as we were covering such a distance. I tried to settle for a lesser amount, but in vain." Though his son's examination was in the second half on Tuesday, his father did not want to take a chance of travelling for eight hours to reach the examination venue. "What if there was heavy traffic?" asked Roy Mahapatra. The cost of accommodation and food of the driver was also borne by Roy Mahapatra. The car owner will not charge an extra amount for the return journey.

The father and son, who stayed at a hotel here, is returning to Malda on Wednesday. Another candidate Biltu who travelled in a private luxury bus from Malda to Kolkata spent Rs 800 on one-way fare as he did not want to board crowded public transport. "From Malda I boarded a Kolkata-bound non-ac luxury bus on Saturday evening and they asked me to pay the amount as there would be no overcrowding and sanitisers would be provided at frequent intervals. "I stayed at a friend's place in Dumdum and came to the exam centre on Tuesday morning.

Almost 60 per cent of the money, given to me by my father, has been spent," Biltu, whose father is a primary school teacher, told PTI outside the exam centre on Tuesday. Vivekananda Kundu, father of Rohan Kundu, did not divulge the fare he had to pay for the journey from Midnapore town to Esplanade here. The journey on a crowded bus made him jittery about the possibility of getting infected by coronavirus. "We had to pay thrice the regular fare but the conductor still kept on picking up passengers without thinking for our safety. We can't afford to pay Rs 25,000 for a car so we chose the public transport," he said. The Kundus, who stayed at a relative's place, is returning to Midnapore on Wednesday. They will come back to the city again on September 13 for the National Eligibility-cum-Entrance Test (NEET). "I am apprehensive about travelling in public transport. Let's hope for the best," he said.

Suspension of local train services due to the COVID-19 pandemic had added to the woes of the candidates. The West Bengal government had earlier opposed the Centre's decision to conduct JEE(Main) and NEET exams, contending that students would be exposed to health hazards amid the pandemic.