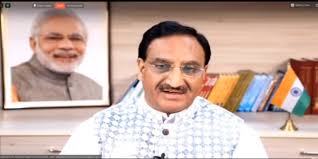 NEW DELHI: The UGC and CBSE have been directed to have a coordination meeting for the release of CBSE class 10 and 12 compartment exams which began on Tuesday, Union Minister of Education Ramesh Pokhriyal 'Nishank' said.

The directive by the Ministry came following concerns of delay in results hampering the prospects of undergraduate admissions for students.

Earlier in the day, the Supreme Court suggested that the CBSE declare the results of the compartment examinations expeditiously and asked the UGC to ensure that students get admission in colleges saying "these are exceptional times".

The top court asked CBSE and UGC to work in tandem to ensure that the careers of two lakh students giving the compartment exams, from September 22 to 29, are not jeopardized.

During the hearing, the top court earlier asked the University Grants Commission (UGC) not to declare the academic calendar till September 24 but was later told that the calendar has already been released.

Taking a serious view of the release of the academic calendar, the top court has sought an explanation from the UGC, to be given on Thursday, and directed that it be placed on record. As per the latest calendar, the session for freshers will begin on November 1 and the admission process will be winded up in October.

The compartment examination for classes 10 and 12 began on Tuesday at 1,268 centres across the country amid strict precautions in view of the COVID-19 pandemic.

The board has also given a chance to class 12 students to appear for the exam if they were unsatisfied with the marks awarded to them on the basis of an alternate assessment scheme after the exams were cancelled due to the spread of COVID-19.

However, class 10 students have not got any option to improve their performance. Over 2.3 lakh candidates are appearing for the compartment exam this year.

On Tuesday, while class 10 students appeared for the Social Science exam, class 12 exams of multiple subjects were scheduled, including Political Sciences, Physics, Biology, History and Accountancy.