Number of medical seats up by 30% in four and half yrs, says PM 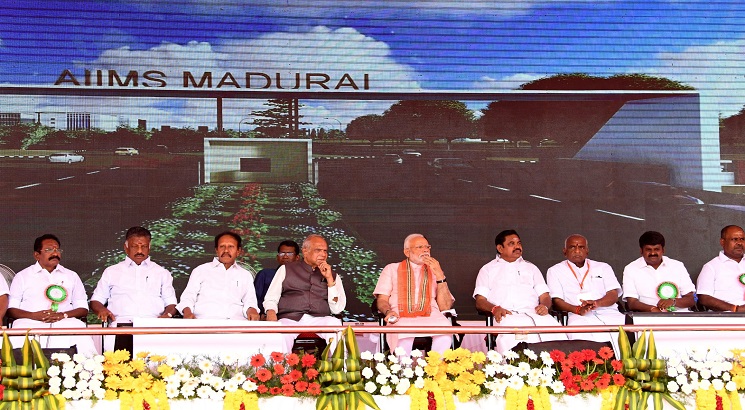 NEW DELHI, JANUARY 28: Prime Minister Narendra Modi during the launch of All India Institute of Medical Sciences (AIIMS) in Madurai highlighting the about achievements of his government has claimed that the total number of seats in medical colleges at the undergraduate level has gone up by around 30 per cent.

Prime Minister said during the launch of AIIMS Madurai said that the idea is to ensure that everyone is healthy and health care is affordable. He added, “The speed and scale at which Mission Indra Dhanush is working is setting a new paradigm in preventive healthcare. Schemes such as Pradhan Mantri Matru Vandhana Yojana and Pradhan Mantri Surakshit Matritva Abhiyan is making Safe pregnancy a mass movement. The number of UG medical seats have been increased by 30% in the last four and half years.”

The new AIIMS will come up at Thoppur in Madurai. Addressing a gathering in Madurai, PM said “AIIMS in Delhi has cultivated a brand name for itself in healthcare. With AIIMS in Madurai, we can say that this brand of healthcare has been taken to all corners of the country - from Kashmir to Madurai and from Guwahati to Gujarat. AIIMS at Madurai will benefit the entire population of Tamil Nadu.”