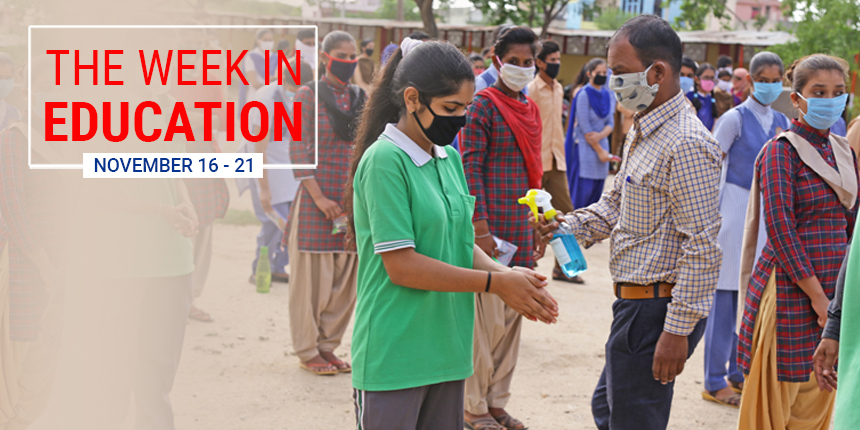 NEW DELHI: While many states made tentative efforts to reopen schools and colleges over October and November, some have either shut institutions down again after a spike in COVID-19 cases or postponed their reopening.

The disruption to the academic schedule and the calendar of exams and entrance tests will clearly continue next year as the JEE Main 2021 dates are yet to be announced. Protests and anger about the conduct of exams during the pandemic have continued for months and this week, it was the chartered accountancy candidates who protested.

These were the most important developments in education this week.

Some states are choosing to be more cautious. Rajasthan announced that all the educational institutions in the state will remain closed till November 30. Earlier, On November 1, the state’s home department had said they would stay shut till November 16.

However, colleges and universities in Punjab reopened this week after being shut for nearly eight months due to the COVID-19 pandemic.

Banaras Hindu University (BHU) has announced to reopen from November 23 in a phased manner, while Central University Gujarat has instructed students to not visit campus owing to increasing cases of COVID-19 infection in the state.

Mewalal Choudhary, education minister of Bihar resigned from the post within three days of his appointment. Choudhary is facing allegations of being involved in a scam related to the appointment of assistant professors during his tenure as the vice-chancellor of Agriculture University in Bhagalpur.

The Joint Entrance Examination (JEE) Main 2021 dates have not been announced officially yet but according to senior officials at the National Testing Agency (NTA), the JEE Main 2021 dates will likely be in February and May instead of January and April.

The Lucknow Bench of the Allahabad High Court this week issued a notice to NTA over the declaration of the National Eligibility-cum-Entrance Test (NEET) result without deciding on objections to a couple of questions in the examination.

The petitioners said the agency announced the result on October 16 without deciding on their objections.

Meghalaya education minister Lahkmen Rymbui announced that the state school board has decided not to hold selection tests for students scheduled to write Class 10 and 12 examinations next year. The Meghalaya Board of School Education’s (MBOSE) Class 10 and Class 12 exams will be held over March-April next year.

The central government has decided to reserve five MBBS seats under the central pool (all-India quota) for wards of COVID-19 warriors for the academic year 2020-2021. The selection will be made by the Medical Council Committee (MCC) through online application on the basis of rank obtained in the NEET 2020.

The Tamil Nadu government this week announced that over 400 students from government schools will get medical college seats under the new 7.5 percent reservation for this category.

Minister of school education, K A Sengottiyan informed that 313 students will join medical and 92 dental colleges, including 55 from Erode district alone.

The new academic session for the freshers at the Delhi University began this week in virtual mode after a delay of over four months.

In another development, the Delhi High Court directed the Delhi University to give details of the courses whose results for Open Book Examination (OBE) have been declared and inform it by when the results of the remaining courses will be declared as the exams were conducted way back in August.