The Week in Education: Board exams, scholarship, reforms 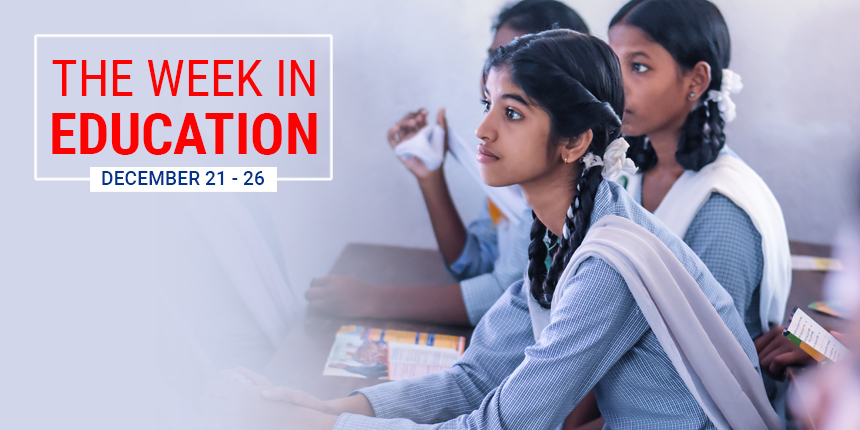 NEW DELHI: Union Education Minister Ramesh Pokriyal ‘Nishank’ this week gave an indication of Central Board of Secondary Education (CBSE) Class 10, 12 board examinations 2021 getting delayed, while West Bengal announced it will hold the two examinations in June.

The Union Cabinet approved Rs 59,000 crore for post-matric scholarships for students from the Scheduled Castes.

Then, the Bar Council of India announced that it will hold the All India Bar Examination (AIBE) in March. In a major relief to post-graduate medical students, the National Medical Commission (NMC) has given several relaxations related to thesis submission norms and examinations prerequisites.

This week the University Grants Commission (UGC) also launched several online undergraduate and post-graduate courses in non-engineering streams through SWAYAM platform which will be available from January 2021.

These are the important developments in education in the last week.

Union education minister Ramesh Pokhriyal ‘Nishank’ during a webinar this week with teachers announced that no board exam will be held in January and February 2021.

The minister said: “Exams will be held after February 2021 whenever the situation is favourable. We will decide and announce the exam dates soon.” The minister also ruled out the possibility of online exams as most of the CBSE schools are situated in rural areas where not all students can access mobile phones, laptops or any other digital devices.

West Bengal’s education minister Partha Chatterjee this week announced that board examinations for Class 10 and 12 will be held in June. The Class 10 (Madhyamik) exams will be held first followed by the Class 12 (Ucchya Madhyamik) examinations. The exams are usually held between February and March every year. Chatterjee said: “We have accepted the recommendations of the West Bengal Board of Secondary Education and the West Bengal Council of Higher Education Education on holding the exams on later dates in view of the pandemic situation.”

The Cabinet Committee on Economic Affairs (CCEA) approved changes in the centrally sponsored Post-Matric Scholarship Scheme for over four crore Scheduled Caste students. It allocated Rs 59,000 crore for this over the next five years.

Of the total investment of Rs 59,048 crore approved by the Cabinet chaired by the prime minister, Narendra Modi, 60 percent of this, or Rs 35,534, would be spent by the Centre and the rest by the state governments.

BCI to hold All India Bar Exam on March 21

The Bar Council of India this week announced that it will hold the All India Bar Exam on March 21, 2021. The online registration for the exam will start from December 26, 2020, and the last date for registration will be February 21, 2021. The last date for payment of exam fee would be February 23, 2021, and February 26, 2021, will be the final date for completion of online forms. The admit cards shall be released online on March 6, 2021.

Karnataka schools to reopen from January 1

The Indian Institute of Technology (IIT) Kanpur this week launched a new diploma program in geodesy, the science of measuring the Earth. The new D-IIT program will be open to candidates from different backgrounds of engineering. The D-IIT program will be offered by the department of civil engineering in three broad areas: geodesy, navigation and mapping, and remote sensing and GIS. For the D-IIT program, the GATE (Graduate Aptitude Test in Engineering) requirement has been waived for working professionals.

The National Medical Commission (NMC) has announced a relaxation of the postgraduate thesis submission norms due to COVID-19. The commission has stated that students can submit the thesis three months before the theory and clinical. The relaxation has been given to postgraduate degree students of batches 2018-19 and 2019-20 only. The NMC has also provided relief to PG students by allowing students to appear for examinations even if they have not made a poster presentation, read a paper at a conference or submitted a paper for publication.

The Delhi University this week permitted five additional undergraduate seats in every affiliated college of the university. The seats will be supernumerary, that is, over and above the sanctioned strength. College principals have been permitted to allow five seats (out of which two may be suggested by the university) admissions in UG courses under 'College University Seats'.

The decision has not gone down well with the teaching and student community of the university as they are alleging that the decision is aimed to promote corruption. DU Academic Council members have also claimed that this policy seriously compromises the transparency in the admission process.

The Uttar Pradesh Institute of Design and Research (UPIDR) University is expected to start offering higher degree courses from 2022, while the bachelor degree courses will begin early next year. Uttar Pradesh state minister for MSME and export promotion Chaudhary Udaybhan Singh said that UPIDR will be the first design university of the country. UPIDR University will be set up in Lucknow and has received the approval of the All India Council for Technical Education (AICTE) to start a session for bachelor degree courses.

Gujarat to set up Special Education Region at Dholera

The Gujarat government this week announced a special education region by signing a pact with Cerestra Managers Pvt Ltd at the Dholera Special Investment Region. The G-SER will be developed as an education hub spread over 1,000 acres that can be expanded up to 5,000 acres. Dholera SIR is a greenfield industrial city being developed around 100 km from Ahmedabad along the Delhi-Mumbai Industrial Corridor.

The academic session of the first batch of All India Institute of Medical Sciences (AIIMS) Rajkot started this week from its temporary campus in Pandit Deendayal Upadhyay Medical College with 50 MBBS students. AIIMS Rajkot will have 125 MBBS and 60 nursing seats in due course of time. The new AIIMS will be a 750-bedded hospital with multiple specialities and super speciality departments and has a total outlay of Rs 1,195 crore, including Rs 185 crore for state-of-the-art medical equipment, Union Health Minister Harsh Vardhan said.

Uttar Pradesh government has made online provision for new colleges to secure university affiliation and for existing colleges to get no-objection-certificates for starting new courses. The affiliations will only be given online from the academic session 2021-22. Now the application can be made online to the concerned university along with all the necessary documents and the concerned university will issue the No Objection Certificate (NOC) after that.