National Medical Commission has extended the MBBS internship period by two months. Odisha to get a new medical college. 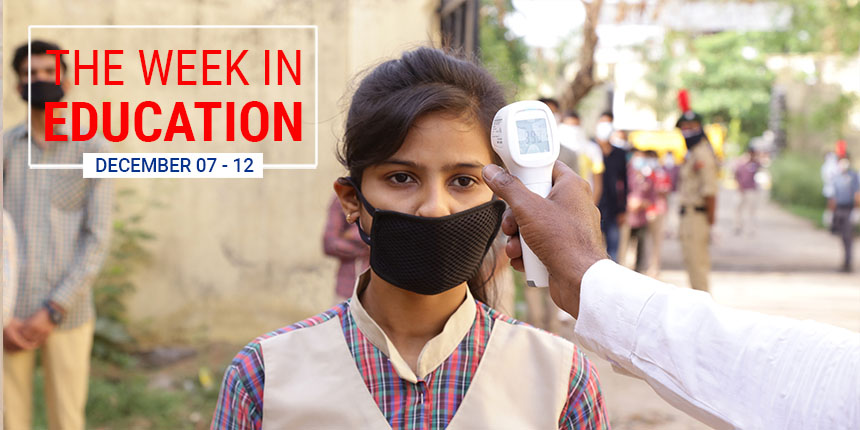 NEW DELHI: To counter speculation about engineering and medical entrance exams, JEE Main and NEET 2021, as well as the 2021 board examinations for Class 10 and 12, Union Education Minister Ramesh Pokhriyal ‘Nishank’ held a live interaction with students and parents this week.

This week also saw some states announcing plans for reopening schools and colleges. About 17 states have already opened schools following the guidelines issued by the ministry of health and family welfare (MoHFW) related to COVID-19 pandemic, Pokhriyal said in the live session. Amid the continuing unlock process during the COVID-19 pandemic, reopening of schools got mixed reactions from students and parents.

These were the most important developments in education in the past week.

No plan to cancel NEET 2021, more attempts for JEE Main

On the announcement of the JEE Main exam date, he said that the ministry is working on a mechanism to announce the examination dates as soon as possible.

The education minister also informed that there is “no plan to cancel NEET 2021”.

The Supreme Court this week came to the rescue of an 18-year-old student by directing IIT Bombay to grant interim admission to him in an engineering course. He had lost his seat when he clicked a wrong button during the online JOSAA counselling process.

The National Law University, Delhi has announced that the All India Law Entrance Test (AILET) will be held on May 2, 2021. The AILET 2021 will be conducted for admissions to integrated BA LLB, LLM and PhD courses offered by the university.

As per the notification released by NLU Delhi, the application form of AILET will be released around the first week of January in online mode.

The National Medical Commission (NMC) has extended the internship period by two months for medical (MBBS) students, till May 31, 2021. Earlier the internship was scheduled to be completed by March 31, 2021. The Commission has issued revised guidelines for the completion of the internship post-COVID-19 lockdown. Earlier on November 25, the NMC instructed medical colleges to take steps for reopening of colleges before December 1, 2020.

As many as 17 states have reopened schools in a phased-manner in the past two months after the Centre issued ‘Unlock 5’ guidelines. However, where schools have opened, attendance has been low, Pokhriyal said. Some states are yet to open due to safety concerns amid Coronavirus outbreak.

Madhya Pradesh Chief Minister Shivraj Singh Chouhan this week said that schools for Classes 1 to 8 in the state will remain shut till March 31 next year. He also said that no test will be conducted for the students of these classes this academic year and they will be evaluated on the basis of their project work. Schools for Classes 10 and 12 will resume shortly for the board exams. But social distancing and other norms will be fully observed in the classrooms to prevent the spread of COVID-19.

Uttarakhand government has announced it will reopen higher education institutions from December 15 The decision was taken at a meeting of the state cabinet chaired by Chief Minister Trivendra Singh Rawat after a committee chaired by the chief secretary submitted its report to the government on the opening of institutions.

The Jammu and Kashmir government announced winter vacations for all government educational institutions and recognised private schools up to Class 12 in the Kashmir division and in winter zone areas of Jammu division will be from December 21 to February 28.

However, winter tutorials for Classes 11 and 12 along with online classes will be held as per COVID-19 guidelines and SOPs from time to time.

The Odisha government has announced plans to open a new medical college in Kandhamal district and a 650-bedded teaching hospital for the existing institute in Koraput district. A proposal in this regard was approved at a cabinet meeting chaired by Chief Minister Naveen Patnaik.

The Maharashtra cabinet this week approved a draft bill for the constitution of an international sports university. The bill will be tabled in the winter session and the university will be set up in the academic year 2021-22.

In a first, Indian Institute of Technology (IIT) Kanpur has established a department of sustainable energy engineering. The department was accorded approval by the Board of Governors of the institute early this week.

IIT Kanpur has also launched a new department for cognitive science. The institute stated that the new department will focus on areas of research such as consciousness studies, perception and action, decision making and reasoning, language processing, social cognition and robotics.

The Supreme Court in an important judgement this week decided that universities cannot dilute the standards prescribed by the technical education regulator, All India Council for Technical Education (AICTE) for courses in colleges. However, the court ruled that universities have the power to “stipulate enhanced norms and standards” for granting affiliation.

The apex court also observed that in present times, no university can afford to have a laid-back attitude, when their own performance is being measured by international standards. Therefore, the power of the universities to prescribe enhanced norms and standards, cannot be doubted.

The Bombay High Court while hearing a Public Interest Litigation said that it is Maharashtra Government's duty to ensure special online education for specially-abled students across the state during the COVID-19 pandemic. The bench suggested using government broadcaster, Doordarshan, to telecast educational programmes.