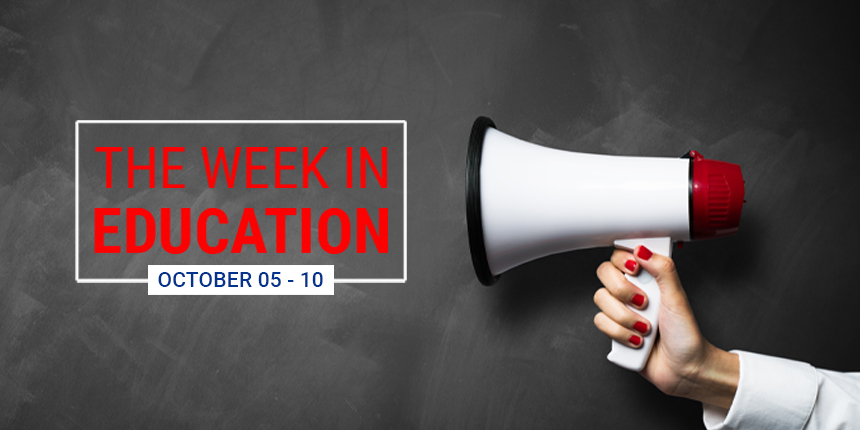 NEW DELHI: With the declaration of results for major exams, the admission season is upon us. In the past week, the results of the Joint Engineering Entrance (JEE) Advanced and Common Law Admission Test were declared. The Joint Seat Allocation Authority (JoSAA) has started the online admission process while Consortium of National Law Universities (CNLU) has also started the counselling for admission to various law schools in the country. While the counselling for engineering and law students has kick-started, Delhi University aspirants may have to wait a little longer for the first cutoff list.

For the states willing to reopen schools after October 15, the education ministry issued detailed guidelines. Owing to the coronavirus pandemic and academic disruptions, the guidelines prioritise the introduction of alternative academic calendar and reintegration of students. The National Human Rights Commission, too, recommended replacement of exams for students amid the pandemic. So far, only Haryana and Punjab are planning to reopen schools in a graded manner after October 15.

In higher education, as many as 24 universities were declared "self-styled, unrecognised institutions" by the University Grants Commission. A majority were found in Uttar Pradesh and Delhi. The All India Council for Technical Education approved a concession 10 percent for students with Kashmiri migrant parents.

The week also saw the declaration of the Nobel Prize winners in the fields of medicine, physics, chemistry and literature.

Indian Institute of Technology (IIT) Delhi has declared the JEE Advanced 2020 result on October 5 at jeeadv.ac.in. Chirag Falor from IIT Bombay Zone has secured the first position in JEE Advanced 2020 toppers list, while Gangula Bhuvan Reddy and Vaibhav Raj have secured the second and third rank. Kanishka Mittal of IIT Roorkee zone is the top-ranked female with CRL 17.

Pune boy Chirag Falor, who has topped this year's JEE Advanced, has decided to skip studying at any IIT in the country as he has already secured admission in the United States' Massachusetts Institute of Technology (MIT).

The consortium is sending invitations to around five times the number of seats available in each category. The registration process for CLAT was open from October 6 (9 am) till October 7 (6 pm).

Education minister Ramesh Pokhriyal ‘Nishank’, released the complete guidelines for school reopening in India.In the guidelines, the ministry said that alternative academic calendars should be framed for the whole year and that these calendars may be “realigned for the whole year in accordance with the emerging situation”. The ministry also said that reintegration of students will take priority once schools reopen. The ministry of home’s (MHA) Unlock 5 guidelines had left the states to decide on the guidelines of reopening schools according to the situation in each state.

The National Human Rights Commission (NHRC), on Sunday, recommended alternate “academic and extracurricular” assessments in place of regular examinations for students upto Class 9. The NHRC recommendations were part of an advisory on the protection of child rights during COVID-19. The commission also said that students should be taught in small groups till school reopening is feasible.

The Central Board of Secondary Education (CBSE), on Wednesday, launched a practical workbook for mathematics to aid students of Classes 7 to 10 during the COVID-19 pandemic.

Students can access the workbook through the CBSE’s official website, cbse.nic.in, and through the DIKSHA platform. DIKSHA is an online platform launched by the Ministry of Education to provide relevant learning material to students and teachers.

Indian Institute of Technology, Hyderabad has announced the starting of a new B.Tech programme in Biomedical Engineering.The programme will train world-class biomedical engineers in next-generation healthcare technologies and will prepare them to work at the frontiers of healthcare innovations in the deep-tech industry or academia.

The University Grants Commission (UGC) on Wednesday announced a list of 24 "self-styled, unrecognised institutions" in the country, terming them as "fake" with the maximum of them operating from Uttar Pradesh followed by Delhi.

Haryana to reopen schools for Class 6-9

After reopening colleges and universities, the Haryana Government is now planning to reopen schools for Classes 6 to 9 amid the COVID-19 outbreak. The decision has been made in line with the Union government’s direction for a graded resumption of schools from October 15. The students will be allowed to visit their schools with the permission of their parents and they can consult teachers to clear their doubts. The schools will be reopened pending a formal announcement from the state education ministry.

The schools had been opened partially for non-containment zones last month.

Wards of Kashmiri migrants and Kashmiri Pandits who are non-migrants and living in the Kashmir Valley will now get a concession in admission to educational institutions in other parts of the country The beneficiaries will get up to 10 percent relaxation in cut-off percentage subject to minimum eligibility requirement. . The All India Council for Technical Education has decided to allow concession for such students from the academic year 2020-21. To accommodate the new change, the AICTE has also allowed an increase in intake capacity up to five per cent course-wise and reservation of at least one seat in merit quota in technical/professional institutions. The AICTE has also waived off domicile requirements for Kashmiri migrants

Contrary to the multiple media reports, the DU admission 2020 first cutoff list may not be released on October 10. Speaking to Careers360, Shobha Bagai, dean of admissions at Delhi University said that the principals of various colleges have to submit the cutoff list on October 10. The cutoffs will be declared after the respective authorities submit the cutoff. The admission process is being conducted completely online due to the COVID-19 outbreak.

A non-profit organisation, Social Jurist has filed an appeal before the Supreme Court seeking exemption from CBSE exam fee payment for students of Class 10 and 12 amid the ongoing COVID pandemic. The appeal highlighted that parents are unable to make ends meet and thus cannot arrange the exam fee. The organisation had earlier appealed in the Delhi High Court which turned down the request. The plea further said the Delhi High Court's order has resulted into denial of relief to 30 lakh students in the country and three lakh are in Delhi alone.

Due to the upcoming Bihar elections, the Institute of Chartered Accountants of India has postponed the ICAI CA November 2020 exams. The ICAI CA exam date, scheduled to be conducted in the first week of November, has been pushed to be conducted on November 19, 21, 23, and 25, 2020. COVID-19 positive or symptomatic students can opt-out from the November session. However, they have the option to appear May 2021 examination cycle without paying an extra fee.

Three scientists won this year's Nobel Prize in physics for advancing our understanding of black holes. The Royal Swedish Academy of Sciences said that Briton Roger Penrose will receive half of this year's prize “for the discovery that black hole formation is a robust prediction of the general theory of relativity”. Goran K Hansson, the academy's secretary-general, said German Reinhard Genzel and American Andrea Ghez will receive the second half of the prize “for the discovery of a supermassive compact object at the centre of our galaxy.” The 2020 Nobel Prize for chemistry has been awarded to Emmanuelle Charpentier and Jennifer Doudna “for the development of a method for genome editing.”