The Week In Education: A new academic calendar and reopening plans 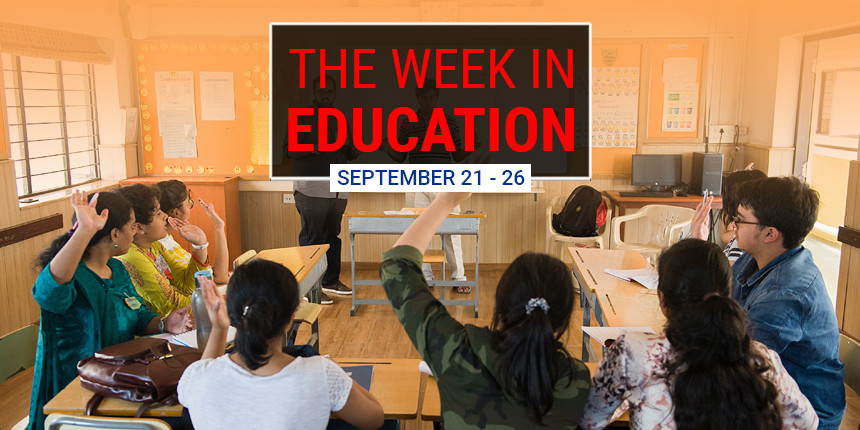 NEW DELHI: The week brought yet another roadmap for universities to follow as the University Grants Commission (UGC) issued fresh guidelines on the academic calendar. The UGC has been trying to salvage the academic schedule, ripped to tatters by the COVId-19 outbreak, since April and its latest guidelines give universities till the end of October to close admissions.

The compartmental exams for the Central Board of Secondary Education (CBSE) began and the Council for Indian School Certificate Examinations (CISCE) announced the schedule for its compartment exams.

These were the main developments in education in the past week.

As per the MHA Unlock 4 guidelines some states initiated the process of reopening schools from Monday. Haryana, Bihar and the UT of Jammu and Kashmir have taken the lead. Haryana partially reopened schools on Monday to enable students in Classes 9 to 12 to visit their institutions.

Schools for students of Classes 9 to 12 in Bihar will resume from September 28, as per an official order issued on Tuesday. Attending classes will not be mandatory. Similarly, all government-run and private schools across Jammu region will reopen partially.

The Ministry of Education released the University Grants Commission’s (UGC) new guidelines on admissions and academic calendar for the upcoming semesters. The admission process will now have to be completed by October-end and the new session begins in November.

Almost two years after the MCI was dissolved and the Board of Governors (BoG), which superseded the Medical Council of India (MCI) was formed on September 26, 2018, the council stands abolished. The former head of Delhi All India Institute of Medical Sciences’ ENT department, Dr Suresh Chandra Sharma, has been appointed as the head of the Commission for three years from September 25.

After successfully conducting the Joint Entrance Examination (JEE) Main in the first week of September by the NAT, the Indian Institute of Technology (IIT) Delhi has informed that around 1,55,511 candidates who have successfully registered, that is 97.94% of the total registered candidates, have been allocated one of the top three exam city choices they have selected during the registration process.

The Central Board of Secondary Education (CBSE) informed the Supreme Court that Class 12 compartment exam results will be declared by October 10 and admissions to undergraduate courses will be on till the end of that month.

The Supreme Court was hearing a plea alleging that the future of these students was in jeopardy because, by the time the results are out, the college admissions would be over.

The Council for Indian School Certificate Examinations (CICSE) has announced the schedule for the compartment and improvement exams for Classes 10 and 12 from October 6 to 9. The results will be declared on October 17.

Some of the states have announced gradual opening of schools and colleges with on-campus educational activities commencing this week at some of the places.

Haryana has allowed reopening of universities and colleges with a trial run from September 26.

While cancelling the NLAT-2020 entrance exam, the apex court also directed that admissions in all 22 National Law Universities (NLUs) be conducted in accordance with CLAT-2020 which is scheduled to be held on September 28.

BTech in engineering and computational mechanics by IIT Delhi

The Indian Institute of Technology (IIT) Delhi has launched a new undergraduate programme, BTech in engineering and computational mechanics. Students qualifying Joint Entrance Examination (JEE) Advanced 2020 will be eligible to join the course.

In Parliament: 5 IIITs to become INIs

This week the Rajya Sabha passed the Indian Institutes of Information Technology Laws (Amendment) Bill, 2020. The Bill seeks to declare five IIITs as institutions of national importance (INIs), thus granting them the power to award degrees. The five IIITs are Surat, Bhopal, Bhagalpur, Agartala, and Raichur.