The Week In Education: Big fight in DU and NEET raises questions 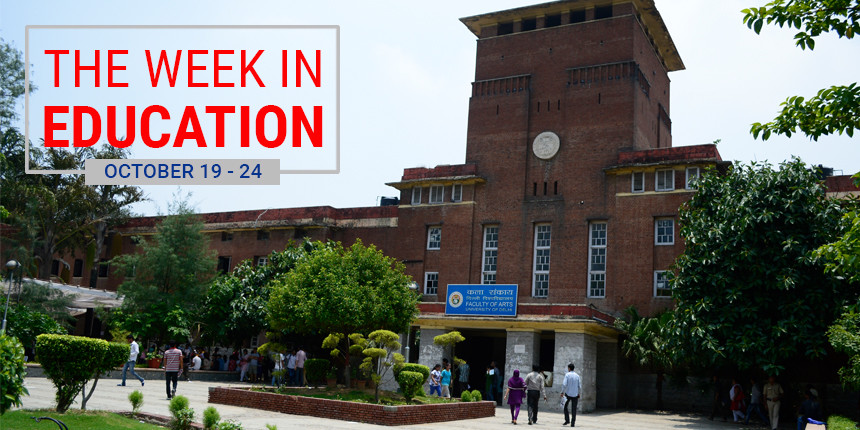 NEW DELHI: An unseemly fight broke out between Delhi University’s top officials in the middle of the admission season and caused utter confusion over several days when it had multiple registrars, South Campus directors and Pro-Vice-Chancellors.

A handful of other universities, quiet for months due to COVID-19, announced phased reopening, as did some states. The regulatory body for technical institutions, the All India Council for Technical Education (AICTE) however, further pushed back the academic calendar by a month. Uttar Pradesh reopened its schools but most states are still hesitant.

These were the most significant developments in education over the past week.

Gujarat education minister Bhupendrasinh Chudasama on Monday said his department will seek everyone's opinion before taking a final decision on reopening schools in the state.

Government and aided schools recorded an average attendance of 39 percent on the first day, while private schools saw 11 per cent attendance as schools reopened after a seven-month hiatus in Uttar Pradesh’s Gautam Buddh Nagar. The Central Board of Secondary Education (CBSE) has introduced a facial recognition system for students. This system will allow students to access their digital academic documents of Class 10 and 12.

The Jawaharlal Nehru University will reopen in a phased manner from November 2, starting with day scholars and final year PhD students who need to access laboratories and submit their theses.

The Karnataka government is preparing to re-open colleges for UG and PG students from November. Deputy chief minister Ashwath Narayan said that a decision would be taken keeping in mind the safety of students and teachers in view of COVID-19 pandemic.

One of the most sought-after universities in the country, Delhi University has been in the news for all the wrong reasons for months. But this week, its recent infamy peaked with an open fight between its senior-most officials, including the Vice-Chancellor and Pro-VC.

The row erupted when the incumbent VC, Yogesh Tyagi, currently on leave on medical grounds, on October 21 appointed a senior professor of Outreach Research department, PC Jha as the director of DU’s South Campus of DU by replacing Suman Kundu. Jha was also appointed as the acting registrar on the same day. Soon after, the acting VC, PC Joshi issued an order asking Jha to vacate the registrar office immediately, which gave way for a letter war between two factions of the university, those for and against the Vice-Chancellor with the ministry of education intervening. However, the war continued and for most of Thursday and Friday, it was not clear who was DU’s registrar, Pro-VC or South Campus director at any given moment.

The Delhi University admission, however, continued on the basis of the second list of DU cut-offs.

The All India Council for Technical Education (AICTE) released its revised academic calendar for admission and start of BTech courses. As per the revised calendar, the last date for admission and commencement of first year engineering classes have been extended by a month. The AICTE has allowed all technical institutions to admit students till November 30 and the academic session will commence from December 1. It was earlier scheduled to begin from November 1.

Days after the declaration of NEET 2020 results, more candidates have reported discrepancies in the result. Medical aspirants from across the country have alleged that erroneous scorecard has been uploaded by the NTA. After many such errors were reported, NTA issued a statement saying the result was declared after “thorough scrutiny” and there are no mistakes. On Tuesday, the agency further clarified that “genuine grievances” will be addressed and legal action will be taken against “unscrupulous agents” spreading fake news of the incorrect result. The agency has also decided to lodge a case under IT act for circulating fake news of errors in result.