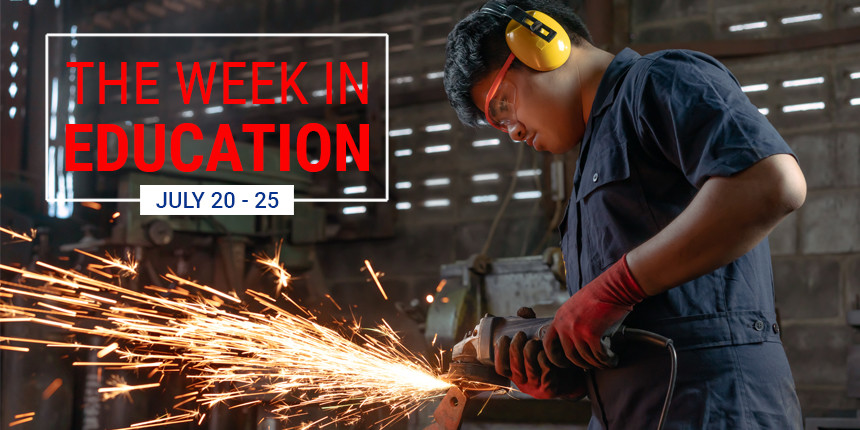 by Aeshwarya Tiwari and R. Radhika

NEW DELHI: After the eligibility criteria for the Joint Entrance Examination Advanced were relaxed, the same waiver was granted for applicants to National Institute of Technology (NITs) and Centrally Funded Technical Institutions (CFTIs) as well. For the 2020 round of admission, applicants have to merely clear the Class 12 board exam and qualify the JEE Main; they no longer need to score 75% in school.

Still more state boards declared the Class 10 and Class 12 examination results. The ministry of human resource development sought suggestions from the parents on the reopening of schools and the apex child rights body released a report saying that even without COVID-19, about 22% schools are unsafe spaces.

Online exams have continued to prove difficult and a handful of states continue to resist the University Grants Commission’s exams guidelines. Given below is a wrap of all the major announcements in education in the past week.

The Board of School Education Haryana declared the result of Class 12 for open school and regular school students. Amongst the regular students, 80.34 per cent students cleared the examination. In open school Class 12 results, the overall pass percentage of fresh students stood at 33 percent. A total of 26,001 fresh students appeared in the exam while the number of repeaters is 23,820.

Punjab School Education Board declared the Class 12 result for over three lakh students. The overall pass percentage came out to be 90.98 per cent.

After cancelling the exams for regular students, the Telangana Open School Society has cancelled the exams for Classes 10 and 12 as well. Pending an official announcement, the students will be promoted based on internal assessment.

Meanwhile, dates for other state boards like Uttarakhand Class 12 result and Goa Class 10 result have also been declared. As per the official notice, the Kerala SSLC Revaluation Result 2020 for Class 10 students will be declared after July 27.

The National Council for Research and Training (NCERT) has revised the chapter on “Politics in India since Independence" in political science textbooks of Class 12 students. While the topic "Separatism and Beyond" has been deleted from the chapter, the abrogation of Article 370, withdrawing the erstwhile state of Jammu and Kashmir’s special status, has been included under the topic "Regional Aspirations". The deleted portion included the various “strands of separatists” and the imposition of President’s rule in 2018. The newly-introduced passage justifies the scrapping of Article 370 due to the “political instability with internal and external ramifications" in the Valley.

The MHRD has invited suggestions from parents on deciding whether to open schools in August, September or October 2020. The education secretaries of all states and union territories were directed to submit the suggestions and feedback of parents on reopening schools post lockdown. The minister has also asked for parents’ expectations from school “as and when they reopen”.

The National Commission for Protection of Child Rights (NCPCR) released a report on school safety that said that about 22 percent of schools across the country are operating from old or dilapidated buildings. The report on ''Safe and Secure School Environment'' was based on a survey of 26,071 schools across 12 states carried out by the NCPCR to examine the safety and security of children in schools in terms different indicators

The HRD minister Ramesh Pokhriyal ‘Nishank’ announced that the Central Seat Allocation Board (CSAB) has decided to relax the eligibility criteria for admission to National Institutes of Technology (NITs) and Centrally Funded Technical Institutions (CFTIs). Those who qualify JEE Main will require only a Class 12 passing certificate. Earlier, it was mandatory to have 75% in Class 12 or equivalent.

Earlier, Pokhriyal had announced that this eligibility requirement was being waived also for admission to the Indian Institutes of Technology (IITs) where only the JEE Advanced score will matter now.

📢Attention JEE Main aspirants!
For admissions in #NITs & other Centrally Funded Technical Institutions, apart from qualifying #JEE Main, the #eligibility is to secure a minimum of 75% marks in XII Board exams or rank among the top 20 percentile in their qualifying examinations.

Pokhriyal also assured candidates the dates for JEE Main and entrance test for the National Defence Academy will not clash.

HRD Minister Ramesh Pokhriyal ‘Nishank’ said that the National Test Abhyas app developed by the National Testing Agency (NTA) has delivered 30 lakh free online practice sessions within 55 days of its launch. Providing mock-tests for JEE and NEET aspirants, the app was launched on May 20.

The Indian Institute of Management (IIM) Indore is likely to launch the official website for the Common Admission Test (CAT) 2020 in the first week of August. Harshal Lowalekar, who was recently appointed the convener of CAT 2020, confirmed.

The Delhi High Court has directed the Delhi University (DU) to bring the data of final-year students' mock tests, which are scheduled to conclude on July 27.

The Delhi High Court also asked the UGC to clarify whether final-year university examinations can be conducted based on multiple choice questions (MCQ), open choices, assignments, and presentations, instead of long-form exams.

Plus, Odisha’s higher education minister Arun Kumar Sahoo again wrote to UGC and MHRD reiterating that holding exams will not be possible. The minister also repeated what the department had already said before, that many educational institutions are now serving as COVID-19 care centres. Careers360 is running a liveblog tracking cases, management protocols and other measures related to COVID-19 on campuses.

The UGC has formed a committee to review the “realistic requirement” of funds of central universities (CUs) during the current financial year. To that end, it has sought information on funds spent on utilities and services such as electricity, water and security. The academic community objected to UGC’s demand for information, and the use of terms like “realistic requirement of funds”. They argue that this represents a “serious encroachment on the statutory bodies of CUs”. This committee has sought details from all 40 central universities on the various types of expenses they incur.

UGC committee for studying in India

The HRD ministry has established another committee to suggest ways in which students who were thinking about going abroad to study can be retained in India. The committee will be headed by the UGC chairman and make its recommendations within a fortnight.

Pokhriyal held the first “brainstorming session” on the “Stay in India and Study in India” initiative on July 24. The All India Council for Technical Education (AICTE) chairman will oversee the issues related to technical institutions and separate sub-committees consisting of directors of IIT, NIT, IIIT, CoA and Vice Chancellors of central universities will be created to assist the chairpersons of UGC and AICTE.

Due to the ongoing pandemic situation many institutes are conducting exams online. Recently Integrated Program in Management Aptitude Test, or IPMAT 2020, conducted by IIM Rohtak through Google forms was not successful leading to many students complaining on social media.

Technical glitches, navigation issues and problems with the exam pattern plagued the online mock test of Common Law Aptitude Test. Many students complained about the limitations of the interface which did not allow navigation from one section to the next. However, addressing the concerns raised by the students, the Consortium of National Law Universities (CNLU) has released a revised CLAT mock test for undergraduate and postgraduate law aspirants.

To provide psychological support to the students and teachers, the ministry of human resource development has launched Manodarpan. Under this initiative, a national toll-free helpline number has been set up to provide tele-counselling to address their mental health and psychosocial issues. Students from schools, colleges and universities under stress can seek help from experienced counsellors, psychologists and other mental health professionals. About 500 experienced counsellors have been roped in to man the national helpline, and 100 counsellors have been mapped to commence the first phase for students.