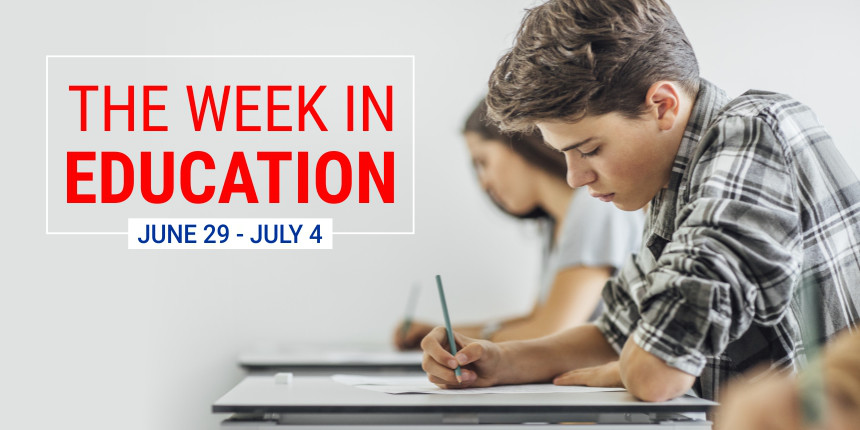 NEW DELHI: The most significant development in the past week was the postponement of major engineering and medical entrance exams, the JEE Main 2020 and NEET 2020, to September.

It came in response to demands for postponement from applicants and their parents worried about the rising cases of COVID-19 in the country. The clamour grew further after the Central Board of Secondary Education (CBSE) and Council for Indian School Certificate Examinations (CISCE) cancelled the remaining Class 10 and Class 12 board exams.

However, much more happened this week: closure of schools was extended; several states announced their board exam results; and Delhi University came close to having contempt proceedings initiated against it for flip-flopping over online open-book exams.

In its weekly wrap of education news, Careers360 will cover the most important announcements, decisions and general developments most relevant to educational institutions, teachers and students.

Listed below are the biggest decisions and developments from the past week.

The Government of India has decided to postpone the national level National Eligibility-cum-Entrance Test (NEET) and the Joint Entrance Exam (Main) to September, in view of increasing cases of coronavirus pandemic. The medical and engineering entrance exams were scheduled to be held in July. JEE Main examination will be held between September 1 to September 6, while NEET has been rescheduled to September 13. JEE advanced exam will be held on September 27.

Demands for cancellation grew after the Central Board of Secondary Education (CBSE) and the Council for Indian School Certificate Examination (CISCE) cancelled remaining Class 10 and Class 12 board exams. Some states, including Odisha and West Bengal followed suit.

The Ministry of Home Affairs (MHA) issued guidelines for the month-long 'Unlock 2' phase beginning July 1. Educational institutions including schools, colleges and coaching institutions are to remain shut till July 31.

As per the guidelines online and distance learning shall continue and be encouraged during this period. Delhi Government announced its plans for online education in Delhi.

Following the MHA’s Unlock 2 guidelines, some states also announced they were keeping all educational institutions closed till July 31. These include Uttar Pradesh and Haryana.

Maharashtra chief minister, Uddhav Thackeray has sent a letter to the prime minister Narendra Modi asking him to instruct central regulatory bodies to issue common guidelines on exam cancellation. Haryana also cancelled exams for final year students in universities which were to be held in July in view of the spike in COVID-19 cases, and the commencement of the new session is likely to be deferred to October. Dr A.P.J. Abdul Kalam Technical University (APJAKTU) in Uttar Pradesh, has sent a proposal to promote over two lakh final-year engineering students without exams. The university has sent this proposal to the UP Government.

The week also saw Delhi University changing postponing the OBE exam dates by 10 days, which were to be conducted from July 1 were postponed to July 10, owing to the COVID-19 crisis. The varsity has also issued date sheet in this regard.

The week also saw the launch of some new online programmes. The Central Board of Secondary Education (CBSE) launched a teachers training programme in collaboration with Tata Trusts.

The National Council of Educational Research and Training, or NCERT, launched an eight-week alternative academic calendar for Classes 1 to 5 to follow while studying at home. Pokhriyal virtually launched an online B.Sc. degree in data science offered by the Indian Institute of Technology (IIT) Madras.

The week, too, saw numerous court cases involving educational institutions or exams being filed or decided.

The Delhi HC also stayed the National Law University, Delhi (NLUD) decision’s reservation policy pushing it to make changes to its admission policy. The same court denied a plea challenging the constitutional validity of the Karnataka Government’s decision to impose 25% domicile reservation in the National Law School of India University in Bengaluru. A plea was filed in the Supreme Court seeking NEET exam centres overseas or a postponement of the exam.