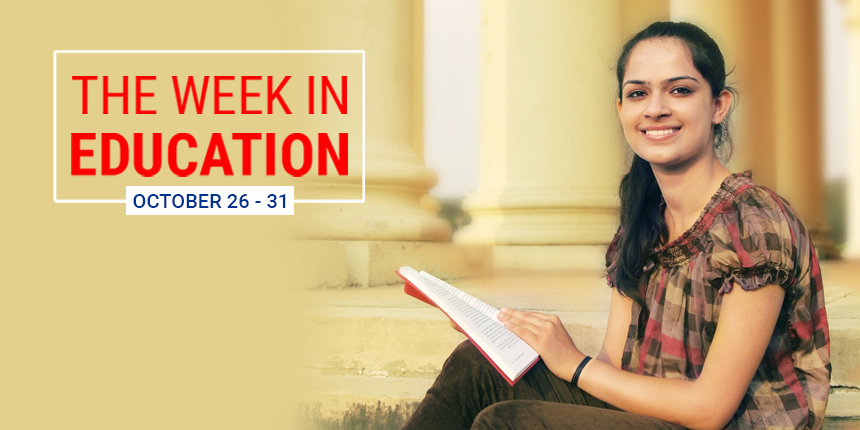 NEW DELHI: During the week, Delhi University Vice Chancellor was removed from his post by the order of the President of India following weeks of administrative tussles between different officials. The JEE Main 2020 topper from Assam was arrested for allegedly using a proxy to write the engineering entrance exam and the Ministry of Home Affairs extended Unlock 5 guidelines to November 30 and states have begun to take decisions on reopening schools.

The Department of Higher Education under the Ministry of Education, on Wednesday removed Yogesh Tyagi from the post of Vice Chancellor of Delhi University and set up an inquiry. The ministry is accusing Tyagi of “dereliction of duties and lack of commitment and devotion to duty”. The ministry said that Tyagi had failed to fill the posts of pro vice chancellor -- vacant since June 2016 -- registrar, finance officer, controller of examination and librarian. Many of these posts have been lying vacant for years, the ministry said.

The Delhi University on Thursday constituted a fact-finding committee to probe the recent developments at the educational institution following a power tussle. The decision was taken at the university's urgent Executive Council (EC) meeting called on Thursday, a day after DU Vice Chancellor Yogesh Tyagi was suspended on the orders of President Ram Nath Kovind.

The Ministry of Home Affairs (MHA) has extended the Unlock 5 re-opening guidelines to November 30. Earlier, while announcing the Unlock 5 guidelines, MHA left the states and Union Territories to decide on reopening of schools and coaching centres post-October 15 in a graded manner.

All schools in Delhi, meanwhile, will continue to be closed till further orders in view of the COVID-19 situation,Deputy Chief Minister Manish Sisodia announced on Wednesday.

A study by the Annual Status of Education Report (ASER), 2020, launched on Wednesday, found that almost three-quarter of all children receive some form of learning support from family members while schools are closed due to the COVID-19 pandemic,. The report pointed out that among enrolled children, more than 60 per cent live in families with at least one smartphone.

The Joint Entrance Exam (JEE) Main topper 2020 from Assam has been arrested by the Assam Police for allegedly using a proxy candidate to write the premier exam. The Assam Police has launched a hunt to apprehend two prime accused - an owner of a coaching institute and an employee of a leading IT company - in connection with the JEE (Mains) examination scam in which a candidate allegedly used an impersonator to appear for the test on his behalf and secured 99.8 per cent marks, a senior officer said on Friday.

The Delhi High Court has refused to interfere with the authorities’ decision not to hold re-examination of JEE (Advanced) for the candidates who could not attempt the entrance test due to their COVID-19 positive status.

A Delhi court has dismissed a plea filed by Professor Sucharita Sen, who suffered injuries during an attack allegedly by masked people inside the Jawaharlal Nehru University campus on January 5, seeking registration of an FIR in the matter, saying a case has already been lodged.

An "incentive mechanism" is being considered for the Institutes of Eminence (IoE) scheme, said education minister Ramesh Pokhriyal ‘Nishank’ on Monday. Pokhriyal held a review meeting on the IoEs with ministry officials and discussed various challenges faced by institutions selected for the IoE status and their brand building.

India ranks among the world’s top 10 countries when it comes to valuing its teaching workforce, according to a new 35-country global survey-based report. ‘Reading Between The Lines: What The World Really Thinks of Teachers’, released by the UK-based Varkey Foundation.

A total of 230 additional seats have been approved for the MBBS course at four medical colleges in Rajasthan, according to an official statement. The National Medical Science Commission has also approved the commencement of Srikalyan Government Medical College, Sikar in the session 2020-21.

Tamil Nadu Governor Banwarilal Purohit has given his assent to a Bill introducing a 7.5 percent reservation for government school students who have cleared the National Eligibility-cum-Entrance Test in admission to medical courses.