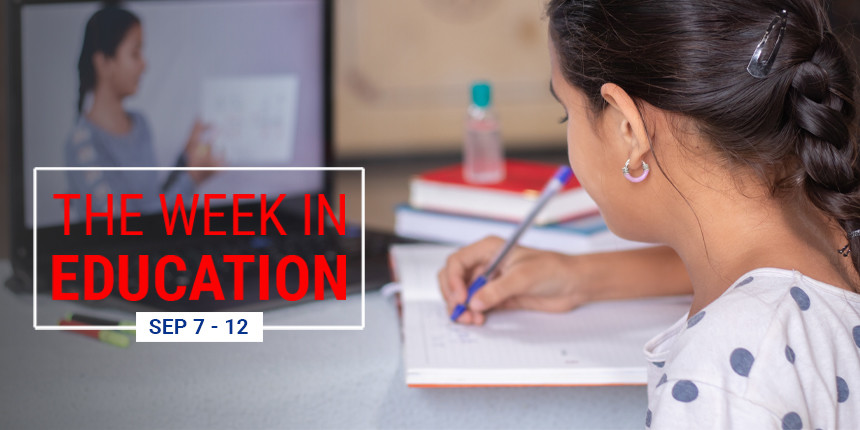 NEW DELHI: This week is bracketed by two mammoth exams -- the JEE Main 2020 for engineering which concluded on September 6 at one end, and NEET 2020 for admission to undergraduate medicine on September 13 at the other.

In between, the National Testing Agency declared the JEE Main 2020 result on Friday -- over the January and September sessions of the exam, 24 students scored 100 percentile. Telangana has the maximum number of 100 percentile scorers -- eight -- with Delhi coming in second with five. The NTA declared the result in just five days.

The decision to hold such large-scale entrance tests and even university exams during the COVID-19 pandemic has been one of the most hotly debated issues over the past few months. It has led to several rounds of litigation with a short span of time and continued even this week.

These were the most significant developments in education this week.

The Centre and state governments are also gearing up for this national level examination. West Bengal has decided to withdraw state-wide complete lockdown on September 12 in the interest of the students appearing for NEET. The Calcutta High Court also directed the West Bengal government to provide accommodation to a NEET aspirant from Thursday to Monday to ensure that she reaches the examination centre in Siliguri well in advance.

A 19-year-old teenager in Tamil Nadu, who could not join medical college despite having cleared NEET earlier and trying to improve his score this time around, allegedly killed himself on Wednesday, police said. Tamil Nadu Chief Minister K Palaniswami on Thursday announced a solatium of Rs seven lakh to the family of the teenager.

The National Testing Agency (NTA) changed 44 exam centres of NEET due to implementation of COVID-19 measures. These changes will affect thousands of candidates across 15 states and Union Territories.

As many as 15.97 lakh candidates have registered to appear for NEET 2020 for admission to 80,055 MBBS and 26,949 BDS seats. Admission to AYUSH and veterinary sciences is through NEET as well. The 1,205 MBBS seats at the 15 AIIMS and the 200 at the two campuses of JIPMER are also filled through NEET.

The Maharashtra government this week scrapped the 70:30 region-wise formula for admission to medical courses in the state. The formula implied reservation for 70 per cent locals (from that region) in medical colleges and 30 per cent from rest of the state.

Medical education minister Amit Deshmukh making an announcement in the State Assembly, said that admission would now be based on the 'one Maharashtra, one merit' principle and solely on the scores in the NEET 2020.

The Government has issued a revised SOP for conducting examinations amid the COVID-19 pandemic, removing the provision that allowed symptomatic candidates who insist on taking an exam to do so in isolation.

As per the revised guidelines of the ministry of health (MoHFW), in regular course, the asymptomatic candidate should be referred to the nearest health centre and allowed to undertake the examination through other means, or the university or educational institution shall arrange for taking the exam at a later date when the student is declared physically fit.

The Centre allowed schools to reopen from September 21 but only for Classes 9 to 12 and with voluntary attendance.

The ministry has also stated that higher educational institutions, as well as skill training centres, can resume their classes from September 21. The health ministry SoP advises implementation of staggered classroom activities with separate time slots, mandatory six feet distance between desks and carry out disinfection of premises, among other COVID-19 safety measures.

Justice Prathiba M Singh said observed: “Getting a degree is an event for a student but it has really become torture”.

Several state governments have also started working on modalities to re-open schools. This week, the Haryana Government decided to start classes for students of Classes 10 to 12 in two state-run schools in Karnal and Sonipat districts on a trial basis after the vast majority of parents of the children in these two institutes gave their go-ahead.

The Madhya Pradesh Board of Secondary Education began the academic session for Classes 9 to 12 online from Monday. The state board will telecast audio-visual lessons on Doordarshan from 7 am to 10 am, and students and teachers will have to register through a mobile app called 'MASHIM' for access.

The Kerala chief minister Pinarayi Vijayan on Wednesday inaugurated 34 school buildings that were renovated as part of the Pothu Vidyabhyasa Samrashana Yajnam (mission to protect public education) by spending Rs five crore for one school in each constituency.

The Delhi government revoked the fee-hike permission granted to a top private school in Chanakyapuri, Deputy chief minister Manish Sisodia said on Thursday. Manish Sisodia reiterated that no school is allowed to hike fees during the COVID-19 pandemic and that action will be taken against the defaulters

Education minister Ramesh Pokhriyal ‘Nishank’, on Wednesday, distributed the CBSE Award to Teachers to 38 educators from affiliated schools across the country.

With 96.2% literacy, Kerala has once again emerged as the most literate state in the country, while Andhra Pradesh featured at the bottom with a rate of 66.4%, showed a report based on National Statistical Office (NSO) survey.

He also asked governors to organise as many virtual conferences as possible in their respective state universities before September 25.

The ministry of education has announced a new literacy scheme, ‘Padhna Likhna Abhiyan’ on the occasion of International Literacy Day. As per the ministry, the new scheme will be a leap forward to achieve the goal of total Literacy before the target year 2030.