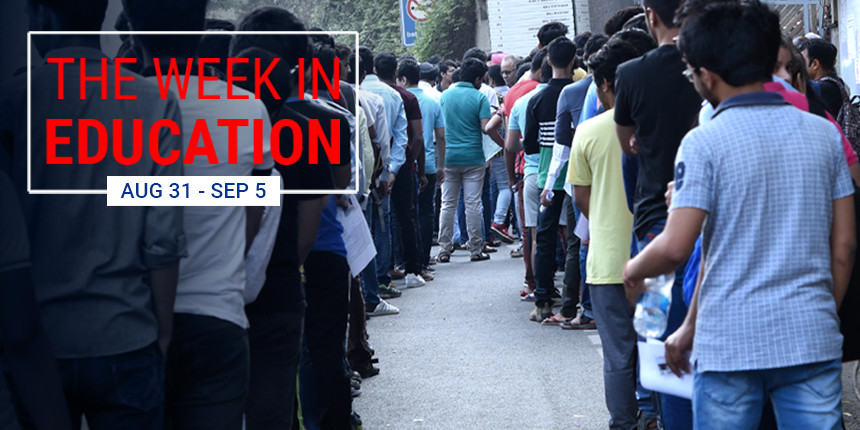 NEW DELHI: The past week saw the commencement of national-level engineering entrance exam, Joint Entrance Examination Main (JEE) 2020 after much flip-flopping and students’ protests demanding postponement. Their plea was rejected by the Supreme Court on August 17. The SC has also rejected the review petition filed by ministers of six state governments with the same demand.

The All India Council for Technical Education and the UGC have also issued fee-refund and admission related guidelines due to delay in final year exams. On September 5, on the occasion of Teachers’ Day, President Ramnath Kovind gave away the National Awards for teachers. Careers360 is holding a brief Teachers’ Day quiz on teachers and education here.

These were the main developments in education last week.

One of the biggest engineering entrance tests, JEE Main 2020, began on September 1. The examinations began with necessary precautions amid the coronavirus pandemic, despite protests by opposition-rule states and a large number of students.

The exams have so far had a smooth run with few incidents of students not being able to reach centres, COVID-19 positive students being sent back, and some parents holding back their ward from appearing in the examination amidst the spread of the coronavirus in the country.

After the first day of the exam, West Bengal chief minister Mamata Banerjee had claimed that 75 percent of JEE-Main candidates in the state could not appear for the exam held on September 1 due to the COVID-19 pandemic.

The plea was filed by ministers of West Bengal, Jharkhand, Chhattisgarh, Punjab, Rajasthan and Maharashtra.

Following the Sc order on final year-exams, state governments have started gearing up for exams. The West Bengal government has asked all the state universities to conduct final semester examinations between October 1 and 18, announced minister Partha Chatterjee.

The Odisha government has however requested the UGC to extend the deadline of the final year university exams for all undergraduate and postgraduate courses from September 30 to October 10.

Haryana has decided to complete the pending final-year examinations by the end of September, and Maharashtra is also planning to push the exams to October. Maharashtra’s higher education minister Uday Samant recently met the Governor Bhagat Singh Koshyari to discuss the issue.

No CLAT for NLSIU

The National Law School of India University (NLSIU) Bangalore has said it will now conduct its own entrance exam, the National Law Aptitude Test (NLAT) 2020 for admitting students to its 5-year integrated BA LLB and one-year LLM programme. The NLAT 2020 exam is scheduled to be conducted on September 12.

The Indian Institute of Technology (IIT) Delhi this week announced the opening of an independent School of Artificial Intelligence (ScAI) on campus. It will run post-graduate-level courses and begin the PhD program from the next admission cycle, January 2021.

The Haryana Higher Education Department has announced it will start an online process for admission to undergraduate classes at state colleges from September 7 for the 2020-21 academic session beginning October 6.

The AICTE issued a circular this week asking institutions to not charge fees for hostels and similar amenities which students are not availing during COVID-19 pandemic lockdown.

The UGC has also advised universities to allow provisional admission to students in undergraduate and postgraduate courses, till September-end and beyond. The UGC is also planning to issue a revised academic calendar on this.

The Delhi High Court has directed the ministry of railways to ensure that all students with disabilities who need to travel to the national capital to appear in physical exams of DU are provided confirmed tickets. The second round of final year examinations will be held from September 14.

Admission to a special category of government schools in Delhi was eased due to COVId-19: COVID-19: Delhi Govt will not hold tests for admission to RPVVs