The Week In Education: Students in court over UGC, JEE, NEET 2020 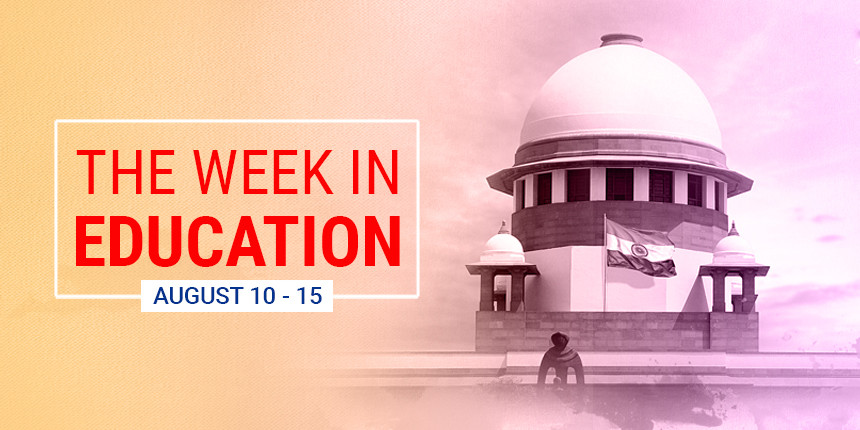 NEW DELHI: The week leading to the 74th Independence Day saw students approaching various courts demanding cancellation of NEET 2020, JEE Main 2020 and final year university examinations mandated by the University Grants Commission (UGC). A petition was also moved in the Supreme Court with a plea to ensure the two entrance tests, NEET for medicine and JEE Main for engineering, are conducted in September as per schedule.

The impact of the COVID-19 pandemic is beginning to show in many ways. A Delhi hostel fired all its clearing staff, upsetting students. And hospitality graduates are struggling to find their feet in one of the industries worst hit by the pandemic

The week also witnessed some states announcing Class 10 and Class 12 board exam results, while the Minister of Education Ramesh Pokhriyal ‘Nishank’ also announced a reformed architecture programme, during this week.

Here are the highlights of the week.

The plea challenging UGC exam-related guidelines came up for hearing twice this week in the Supreme Court and hearings were adjourned both times. At the beginning of the week, SC asked the UGC and the Ministry of Home Affairs to submit their affidavits on the exams scheduled in September. On August 14, the matter was adjourned to August 18.

After Delhi and Maharashtra, Odisha made its stand clear in SC and it is against holding final year university exams.

The State Government of Odisha, through its Advocate on Record, appeared in the Hon’ble Supreme Court today in the case matter relating to cancellation of final term UG/PG examinations.The case will be heard again on Tuesday.

A group of students and parents have filed a counter plea in the Supreme Court asking it to direct the National Testing Agency to conduct NEET and JEE Main 2020 exams in September as scheduled. This comes on the heels of the plea filed by 11 students seeking postponement. A group of parents have also moved the Supreme Court to prevent further postponement of JEE Main and NEET 2020.

A Public Interest Litigation (PIL) was also filed during this week in the Karnataka High Court challenging the decision to conduct Consortium of Medical Engineering and Dental Colleges of Karnataka Under Graduate Entrance Test (COMEDK UGET) 2020 on August 19. However, the Karnataka HC did not interfere with the schedule.

In legal education, the National Law Universities (NLU) consortium informed the Delhi High Court that since the Common Law Admission Test (CLAT) 2020 has been postponed. The plea seeking permission for candidates to take the exam from their homes instead of exam centres is no longer maintainable.

After getting a go-ahead from the Delhi High Court, the Delhi University started its online open-book examination (OBE) on August 10 for final year students. However, as soon as the examinations began, the students from different streams started sharing the challenges they were facing with DU OBE including technical glitches, registration snags, power cut delays and difficulty in uploading answer sheets.

In another development, the Mizoram University (MZU) has deferred the undergraduate examinations slated to begin early this week following appeals by student bodies and Mizoram Principals Council due to the surge in COVID-19 cases in the state.

With board results of most of the state boards and the Central Board of Secondary Education (CBSE) out, universities have started their admission process at some of the places. Some of the colleges have also commenced their classes online from this week.

West Bengal announced that students will not be charged for applying to state-run colleges and universities for admission in undergraduate courses. As per an official order, no money can be charged from students for providing application forms or prospectus for admission.

Xavier School of Management, XLRI, has begun the new batch for the academic session of 2020. A total of 477 students joined this program in both Jamshedpur and Delhi-NCR campuses.

With the new National Education Policy 2020, announced a week ago, the different regulatory bodies have also started coming up with new regulations in line with suggestions in the NEP 2020. The Council of Architecture's (COA) announced ‘Minimum Standards of Architectural Education’ Regulations, 2020 this week.

As per the changed norms, students will have the option of exiting the programme at the end of three years, with the university awarding an “appropriate” degree.

The CoA has also announced that the newly-launched regulations will introduce choice based credit systems with practical hands-on training in the eighth and ninth semesters.

In another development in line with the NEP 2020, the Union education minister Ramesh Pokhriyal ‘Nishank’ has announced that the universities will not be able to provide affiliation to more than 300 colleges, proposing granting more autonomy to colleges and phasing out affiliation system

Independence Day celebrations were significantly muted by COVID-19 with several states banning the gathering of children at schools. Celebrations, if they were held at all, were conducted online. At the institutions, there were flag-hoisting and tree-plantation ceremonies with very few present.