The Week In Education: NEP 2020 and education reform project 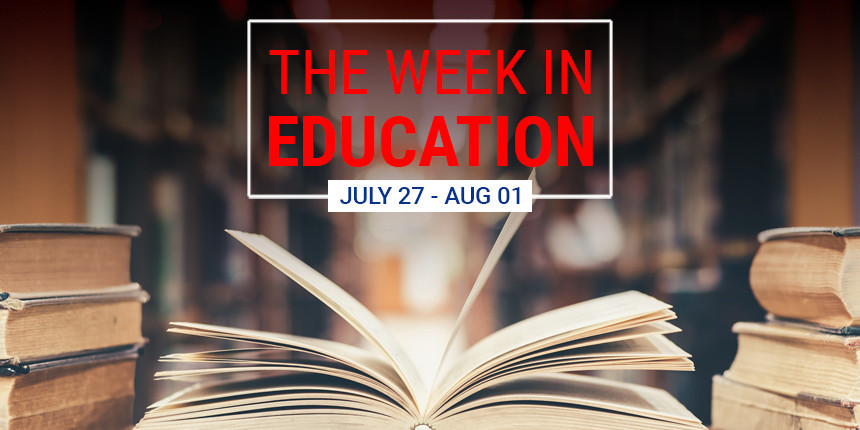 NEW DELHI: The last week of July saw the development that has been in the making for close to five years -- the draft National Education Policy 2020 was cleared by the Union Cabinet on July 29. Along with it, the ministry of human resource development’s rechristening into “ministry of education” was also approved.

A roadmap that promises radical changes to higher and lower education, the NEP 2020 proposes new regulatory bodies and broad restructuring of both. Most of this week’s wrap of developments in education covers its prescriptions.

Though less momentous, there were other announcements as well. The ministry of home affairs Unlock 3 guidelines said schools and colleges are to remain shut for another month. Still more state boards announced Class 10 and Class 12 exam results. Several groups of students moved various courts, including the Supreme Court, against exams, in particular the ones for final-year university students made compulsory by the University Grants Commission.

Given below are the most important decisions on education from the past week.

Thirty-four years after the existing National Policy on Education was introduced, the Narendra Modi-led government has come up with a new education policy. The first committee for it was constituted in 2015 but the first official draft would be made public for comment only in May 2019.

Framing of NEP 2020 will be remembered as a shining example of participative governance. I thank all those who have worked hard in the formulation of the NEP 2020.

May education brighten our nation and lead it to prosperity.

These are the highlights from the version cleared by the Cabinet on Wednesday.

The proposed NEP 2020 proposes massive reforms for every part of higher education. For starters, it sets itself the very ambitious target of achieving a 50% gross enrollment ratio -- the percentage of college-age students actually enrolled -- by 2035. At present, it is 26.3%

Here are the main changes proposed for higher education.

The ministry of home affairs released a fresh set of guidelines, Unlock-3, on managing the coronavirus pandemic. As per the MHA guidelines, all the educational institutions are to remain shut till August 31.

“After extensive consultation with states and UTs, it has been decided that schools, colleges and coaching institutions will remain closed till August 31, 2020,” reads MHA guidelines.

Prior to that some states had also announced extension of lockdown till August 31. West Bengal chief minister, Mamata Banerjee, announced that the lockdown in the containment zones of the state would continue till August 31.

The Supreme Court of India accepted a petition filed by a group of 31 students challenging the UGC guidelines asking universities to conduct final year examinations by the end of September. On July 31, the Supreme Court scheduled the next hearing for August 10.

The SC rejected a plea challenging the conduct of Common Law Admission Test (CLAT) 2020 in online mode today. CLAT was originally scheduled to be conducted in offline mode, but due to ongoing COVID-19 lockdown, the Consortium of National Law Universities switched from offline to online mode.

In another development, the Madras High Court directed the Central Government to constitute a committee to make a decision on the issue of whether to provide OBC reservation in All India Quota (AIQ) seats in medical admissions.

The week also saw some of the state boards announcing their Class 10 and 12 results. Maharashtra State Board of Secondary and Higher Secondary Education announced SSC Results 2020. This year's pass percentage is 95.30%, an increase of 18.2 percentage points over the previous year’s result. Board of Secondary Education, Odisha, also declared the Class 10 results this week for over 5.60 lakh students. The overall passing percentage for BSE Odisha Class 10 result was 78.76%.

Board of Secondary Education, Rajasthan (BSER) also announced RBSE 10th results this week for more than 11.79 lakh students. This year the overall pass percentage for Rajasthan 10th result 2020 was 80.63%.